Skip to content
Posted on January 29, 2014 by David Qaoud

I like Richard Sherman. And I’m a St. Louis Rams fan. 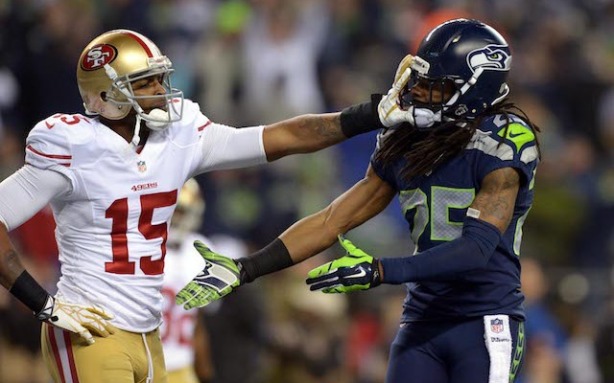 How can you not appreciate what he has accomplished?

Grew up in the projects, graduated from Stanford, a gifted athlete, and is now currently one of the best players in the NFL. Impressive, to say the least.

You probably already know, but two Sundays ago after making the play that would inevitably lead his team to the Super bowl, Sherman uttered things about opponent, Michael Crabtree, in a post-game interview on National Television that were overly emotional at best, degrading at worst. But hey, he just made the play that would send his team to the Ship so we should let him off the hook, right?

I’m not sure if we should merely overlook what he did, but I know that we can learn from this experience, and one of the biggest takeaways is a lesson in character.

The issue with how we use our words is not so much an indicator of intelligence as much as it is a revealing of character. We can partly attest your charter by what you say.

We have never spoken a neutral word. What you say is of significant importance. Our words go into out hearer’s ears, to their mind, and then down to their soul. And by saying what he said last week, Sherman’s character was revealed. And every time we speak, our character is, too.

This is no light matter. As John Calvin once said, “I consider looseness with words no less of a defect than looseness of bowels.” To be careless and flippant with words is the mark of the immature. The issue is not so much with our words, but with our heart. When we speak, part of our heart is revealed, because Jesus said that, “Out of the abundance of the heart the mouth speaks” (Luke 6:45).

Another way our character is revealed is by our actions. But not only by our actions, but also by our reactions. In others words, it is not only measured by what we do, but also by how we react to things. When we have no time to prepare for what to say or do is when the most accurate revealing of our character is shown. When we are interrupted, caught off guard, surprised, shocked — in those moments, who we truly are in the depths of our soul is revealed.  C.S. Lewis puts it this way: “Surely what a man does when he is taken off his guard is best evidence for what sort of man he is.”

Richard Sherman used words, had little time to prepare for the interview, and his character was revealed.

You use words. And react to things. People are watching — your character is on display.

Let’s not be too hard on Sherman. Given the situation, I’m not sure how I would have done, but I’m sure that we can all agree that we have said and reacted to things poorly in the past. Let us examine our hearts to see what we fill it with, and on this forthcoming Superbowl Sunday, let us be reminded that while the world is watching the Superbowl, somebody is watching you.

Hope this was helpful. But still — This post was probably mediocre at best.

5 thoughts on “A Lesson We Can Learn From Richard Sherman”